Emerging at the forefront of blockchain gaming innovation, EXO is an entirely on-chain Play-2-Earn MMORPG in which players take charge of their planets, grow their civilizations, and then combat against other players in epic space battles to compete for real cryptocurrency awards.

Featuring a cutting-edge combination of Sci-Fi and fantasy, players have the chance to build their own civilizations inside the confines of the borders of the blockchain realm, as the launch of EXO is scheduled on 5 August 2022 at 4 PM EST. We will introduce EXO — Season One, a version explaining the game’s fundamental mechanics. After that, we will iterate and expand the game, introducing brand-new functions and adventures in batches that we refer to as Seasons.

Through EXO, we aim to establish a Play–2–Earn ecosystem based on a sustainable open economy paradigm, whereby all players contribute to the game’s overall economy and are rewarded monetarily for their efforts. Therefore, it is quite possible that it will bring new game ideas and retention models that have not been seen in contemporary gaming.

By joining EXO, you will become a part of an adventure dispatched to find a home beyond Earth, and you will write the next chapter in the history of humankind as you lead your novel civilization into a new horizon.

EXO’s story commences in the year 2030. During the first human voyage to Mars, the crew has several technical issues. While searching for the cause of the problems, they come across a representative of an old culture who tells the narrative of 9,999 monoliths dispersed around the cosmos.

To join the EXO universe, it is necessary to activate the Planet. Users must buy both the Planet and the Monolith, resulting in an active Planet. Subsequently, a novel alien race arises.

Next, to activate the PvP mode and earnings prospects, you must “Portal–Stake” the Planet. Since the Planet NFT is on the ETH network and the game is based on Polygon, this required a cross-chain interaction.

Overall, being the leader of an active planet is defined by two core pursuits:

In this pursuit, you should investigate the perils and opportunities presented by a new Planet distinct from Earth in its hostile life forms, otherworldly resources, and treacherous places. 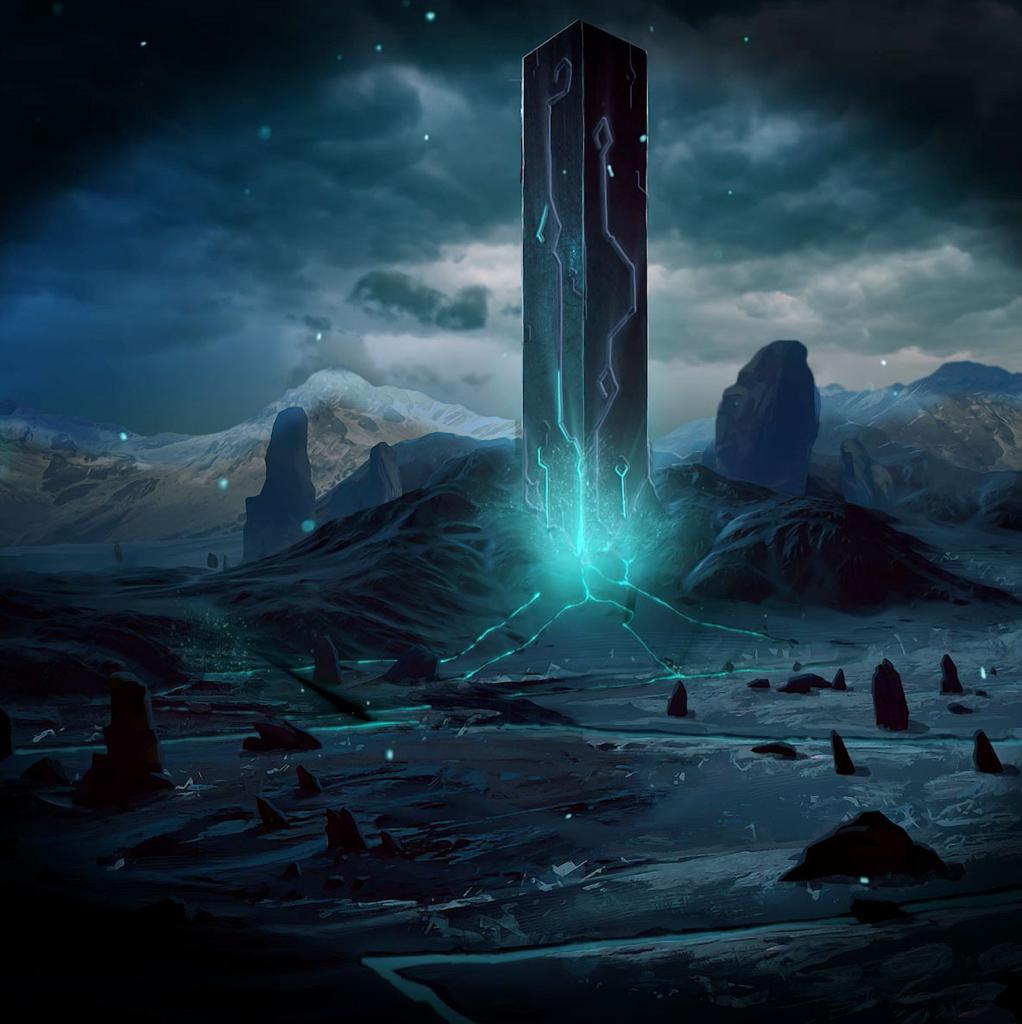 Being the primary economic unit of our ecosystem, the XO token is an ERC–20 tokens explicitly developed to be the only type of monetary unit used inside the game. Initially issued on Polygon, we will construct a bridge to Ethereum Mainnet, putting up multiple liquidity pools for the primary tokens issued on Polygon.

Those who participate in the EXO ecosystem will benefit from many economic opportunities that combine entertainment with real financial gains.

How EXO Builds a Cross–chain Ecosystem

By allowing anybody to develop anywhere in a cross-chain ecosystem, we can significantly advance the seamless experience that internet users currently enjoy. Eventually, cross-chain solutions will facilitate integrating multiple blockchains into a single system with enhanced functionality. Overall, the player NFTs will be mined on Ethereum Mainnet, however, the whole gaming will be placed on the Polygon network.

To develop an on-chain game capable of recording tens of thousands of transactions, we must figure out a means to reduce the enormous gas costs usually associated with Ethereum transactions. Therefore, to bring the gameplay to the Polygon network, we decided to form a partnership with Polygon Studios.

Hence, the Player’s NFT is staked in a portal contract on Layer 1 (L1) using Polygon’s State Sync mechanism, which is effectively implemented in the FX–Portal. This occurs simultaneously with activating the Planet’s avatar on Layer 2, making the entire process of entering the game feel entirely seamless (L2). When the player is ready to quit the game, all they have to do is switch L2 to L1, and the procedure is complete.

The static and unchangeable digital assets that we are used to working with have been superseded by the more advanced dynamic NFTs. They open up a whole new arena of possibilities, in which NFTs are dynamic entities constantly adapting to novel circumstances and occurrences.

To materialize the identity of the EXO users, the following items are included in the same token for all of EXO’s player NFTs:

As the players progress through the game, we will need to update the components so that the tokens accurately represent the players’ efforts. This signifies that dynamic NFTs keep their one–of–a–kind identifiers but are given the opportunity to change and update some aspects of their NFTs:

Moving forward, we are dedicated to expanding the characteristics available for purchase in the Shop by adding new armors and accessories. In the form of restricted supply drops that occur once every week. When you create a style for your avatar by combining components from many different sets, not only will it be distinctive, but it will also be uniquely yours. 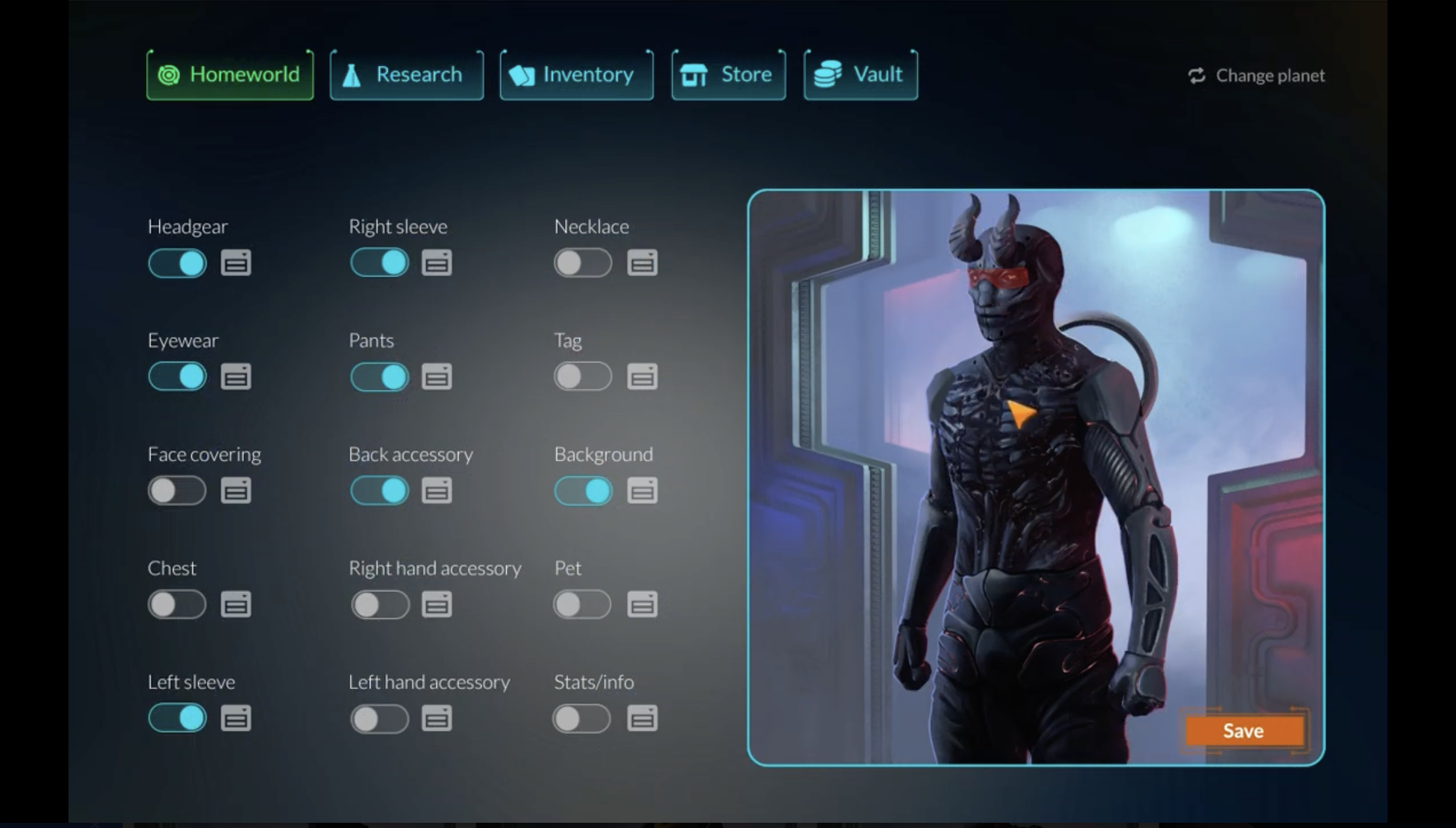 Only game developers and publishers received financial rewards in the gaming sector for a long time. However, with the advent of blockchain technology, players are finally getting a shot to have a slice of the pie, and EXO leverages these developments to stand out from the crowd.

We acknowledge that complete ownership of digital assets will inevitably become the norm across all gaming platforms and beyond, and we are here to welcome this new phase of the gaming world. Hence, every in-game object in EXO is an NFT based on the ERC–1155 standard. This grants the player ownership of the item in question inside the game and gives them control over how it is used. Our objective is to establish a new benchmark in the play–to–earn industry by integrating a gameplay mode that focuses on the broad exploration of space with meticulous strategy elements brought to life by top–quality graphics.

Research — In all instances, a player may only research one item at a time, thus, a decision must be made based on their priorities as to which object to research. Moreover, the player must possess the amount of XO tokens specified on the item card to research an item. All items have a time requirement, thus after that period has elapsed, the player will get a brand-new NFT. 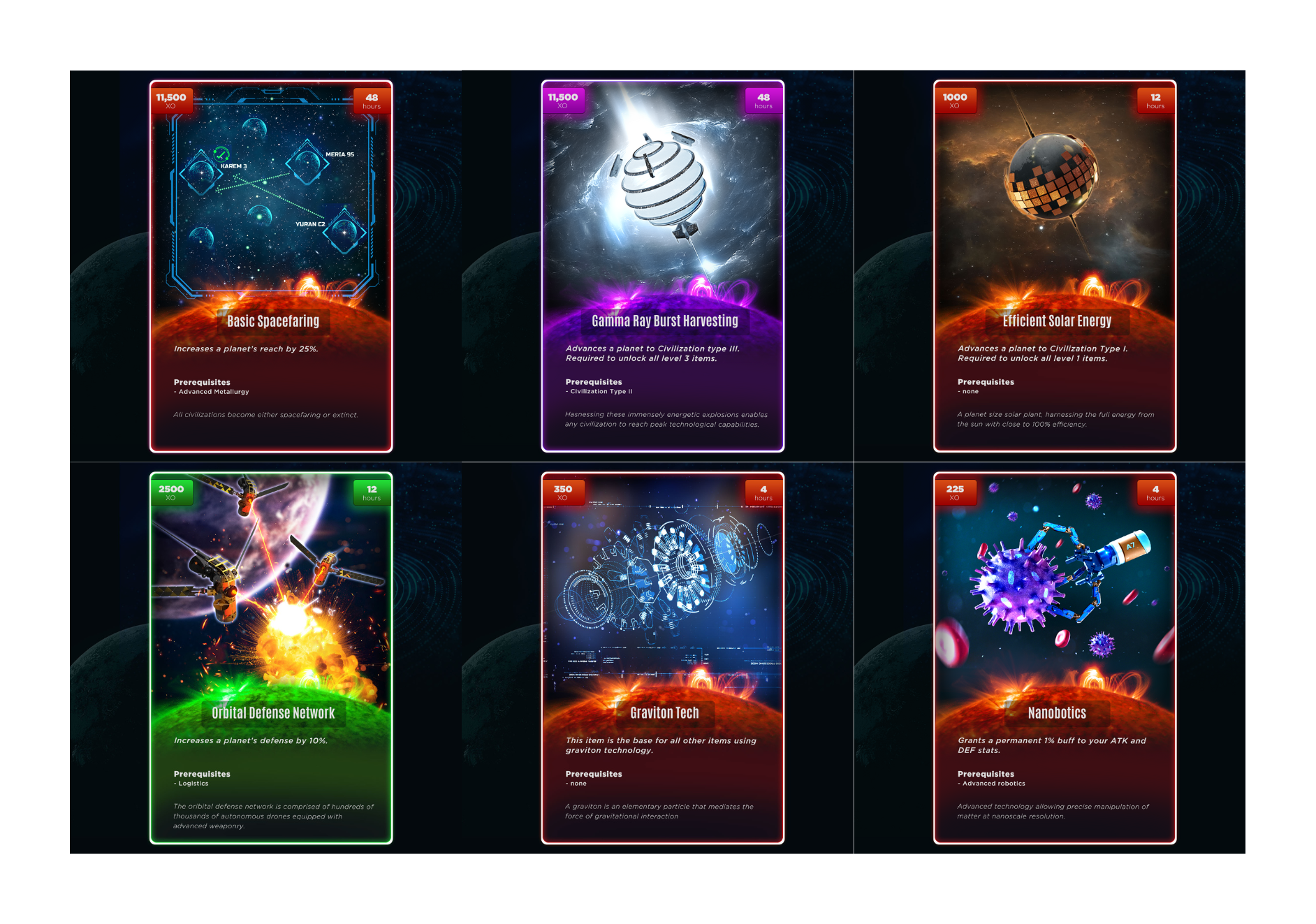 Utilizing In-game Items — All things a player investigates may be seen in the player’s inventory at any time. Burning a specific token is required to use an item, and this action imprints all of the perks that utilizing the item permanently conferred on the Planet.

Retailing In–game Objects — Since the ERC–1155 tokens represent all in-game products, a player can sell an item at any moment on the secondary market, whether that market is OpenSea or another one entirely.

Enhance Your Statistics: Based on the Kardashev scale, all planets in EXO begin with a type 0 civilization. By studying various artifacts, they can enhance their level of development all the way up to type III, which represents the ultimate evolution phase. Established in 1964 by the Soviet astronomer Nikolai Kardashev, the Kardashev scale is a methodology for determining a civilization’s degree of technical development based on energy use. 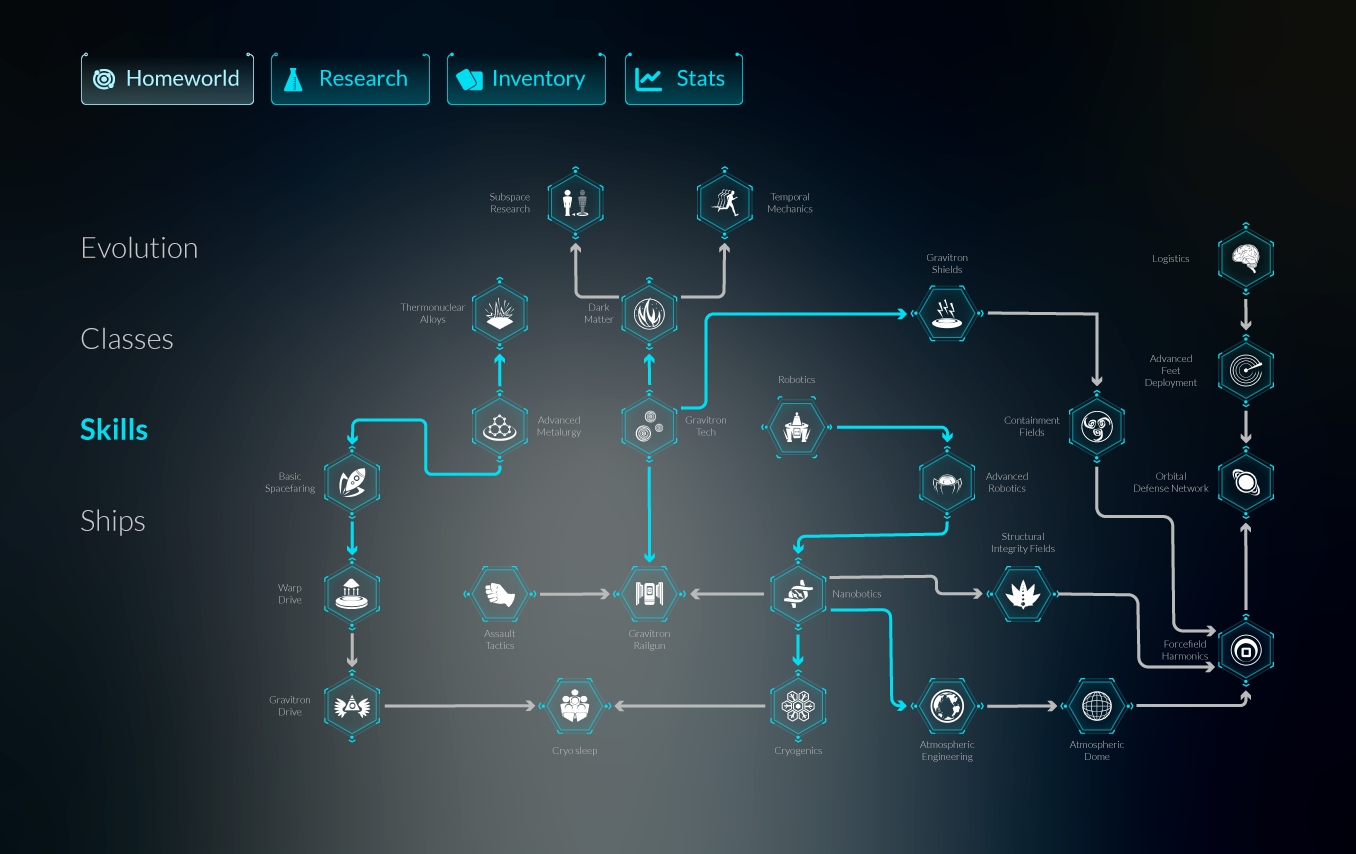 In EXO, each Planet has a total of four basic statistics:

Players might improve their Planet’s statistics by researching a variety of various objects, the vast majority of which are accessible according to the Planet’s level. Some people could concentrate on creating a planet, the most hostile, evil world with the most destructive power in the whole cosmos. But our advice? Balance your stats.

In your role as supreme leader of your Planet, you are responsible for leading your civilization’s development. If you place too much emphasis on your Attack, you will leave yourself vulnerable to the actions of the other players. If you emphasize defense excessively, you will never be successful in attacking. Hence, you should strike the perfect balance for your tactics.

Furthermore, rarity denotes the scarcity of the characteristics possessed by your in-game items, and the subsequent types define it:

After the successful deployment of Season 1, we will introduce the Season 2 of EXO. Even while the number of people that own planets will stay the same, 9,999, we will expand the player base by introducing a new player class called starships. Every single Starship has the potential to belong to any number of different classes, ranging from mining boats to transport ones to marauders to military ships that protect the peace.

Additional details will be released as the project progresses.

TRON DAO and Other Blockchain Leaders Jointly Roll out USDD

Pension Funds Getting Set to Board Bitcoin Bandwagon, Say Insiders

Greenex: Bringing the Much Necessary Green Revolution to Blockchains